(From the President’s Corner section in Volume 18, No. 13 of the Liberator Online. Subscribe here!) 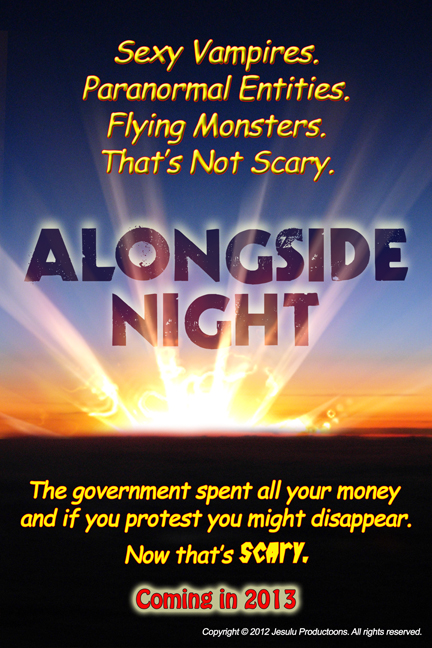 I’m excited to report a new milestone for the World’s Smallest Political Quiz.

As you probably know, the Quiz has been reprinted in books, textbooks, newspapers, magazines, newsletters, and many other places.

Now it’s broken into a new medium: for the first time to my knowledge, the Quiz is appearing in a feature-length movie!

Alongside Night began life as a novel by J. Neil Schulman. First published in 1979, it is one of the most acclaimed libertarian novels of all time. It’s been praised by the likes of Ron Paul, Milton Friedman, Anthony Burgess, Walter Block, Thomas Szasz, F. Paul Wilson, Poul Anderson, Robert Anton Wilson, Thomas Woods, Publisher’s Weekly, the Los Angeles Times Book Review… and we could go on and on.

A special free anniversary edition of the novel was recently downloaded an incredible 350,000-plus times.

Now Schulman – who has written many other highly-praised books, fiction and non-fiction, and is a leading libertarian activist – has turned his award-winning novel into a feature film, with himself as writer and director.

Starring in Alongside Night is Kevin Sorbo, one of the most popular actors in the world today. Sorbo gained fame playing Hercules in five TV movies in 1994, which led to the continuing series Hercules: The Legendary Journeys (1995-1999) — the #1 rated show worldwide. Sorbo gained additional fame and fans from his starring role of Captain Dylan Hunt on the 2001-2005 series Andromeda. His many films include Meet the Spartans, Kull the Conqueror, and An American Carol.

Here’s a summary of the plot of Alongside Night, courtesy of Schulman: “The American economy is in freefall. Markets are crashing. Inflation is soaring. Bankruptcies, foreclosures and unemployment are up, and even defense contracts are going overseas. The United States military is threatening to go on strike. Foreigners are buying up everything in America at firesale prices while gloating over the fall of a once great nation. Homeless people and gangs own the streets. Smugglers use the latest technology to operate bold enterprises that the government is powerless to stop, even with totalitarian spying on private communications. Anyone declared a terrorist by the administration is being sent to a secret federal prison where constitutional rights don’t exist.

“And caught in the middle of it all are the brilliant teenage son of a missing Nobel-Prize-winning economist, his best friend from prep school whose uncle was once an Israeli commando, and the beautiful but mysterious teenage girl he meets in a secret underground … a girl who carries a pistol with a silencer.”

Sneak previews for Alongside Night have already been held at a few festivals and libertarian events, and as I write this column the film is playing at the huge FreedomFest liberty bash in Las Vegas.

To learn more about Alongside Night, including future showings, visit the movie’s Facebook page and the official movie website.

And now… let’s look at the Quiz in it’s first-ever film appearance!

Above is the trailer for Alongside Night. At about 40 seconds, look to your right.

Yes, there it is: the Quiz chart, on the wall.

How did it get there? What’s happening in that room? What next?

See Alongside Night and find out!