(From the President’s Corner section in Volume 19, No. 5 of the Liberator Online. Subscribe here!)

Guess which booth at this year’s widely-covered CPAC drew the biggest, mostexcited crowds? 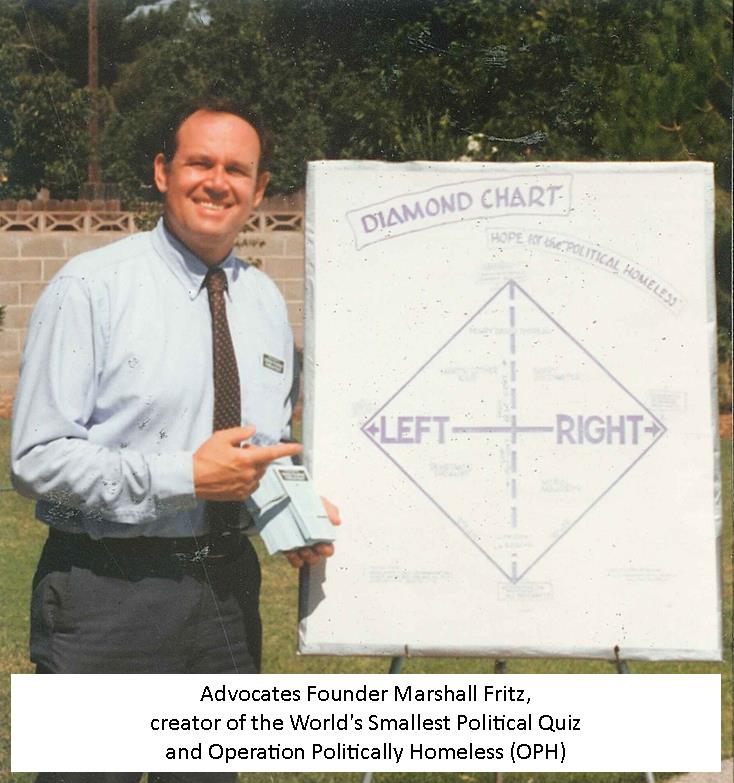 (CPAC — the Conservative Political Action Committee — is the nation’s largest annual gathering of conservative activists and office holders, with a strong number of libertarian students among the attendees.)

Here’s what The Daily Beast — one of the most influential news sites on the web, read by millions of readers each month – reported:

“Of all the booths, the one consistently drawing the biggest crowds was WarOnYouth, a joint project by Generation Opportunity and Young Americans for Liberty (YAL)…

“As a clever gimmick, YAL was having passers-by fill out a quickie quiz to determine where they fell on an ideological quadrant that included not just a left/right divide, but also a libertarian/statist one.

“According to the results chart, the vast majority of respondents fell into the libertarian range, represented by — surprise! — Ron and Rand Paul.”

Once again the incredible effectiveness of the Advocates’ Operation Politically Homeless booth was demonstrated. Once again OPH has been used to reach the minds of the political leaders, activists and donors of tomorrow.

From the very first time the Advocates introduced OPH, some 25 years ago, users have told us over and over again that OPH brings their outreach booth and tabling efforts alive.

I strongly believe OPH, and the World’s Smallest Political Quiz that is the heart of OPH, has played a major role in opening up America’s political landscape to include libertarians.

Prior to the introduction of the World’s Smallest Political Quiz, most Americans thought of politics using a simplistic model of left versus right — which excludes libertarians.

But for over 25 years the Quiz has opened tens of millions of minds to a better political map — one that includes libertarians.

The CPAC OPH booth is just the latest example of the crowd-drawing, mind-opening power of this remarkable tool.

Ron Paul observed the power of the Quiz and OPH many years ago, and put it very well: “The World’s Smallest Political Quiz is responsible for many Americans’ first contact with libertarian ideas. While traveling around the country, I have often heard people say, ‘I never knew I was a libertarian until I took the Quiz!'”

More good news: I am pleased to announce a new OPH milestone.

In the past few years the Advocates has given — completely free of charge — over 1,000 OPH booths to libertarian campus organizations across America.

These kits have reached tens of thousands of students with the ideas of liberty, and they will continue to do so for years. (Student groups: learn more about OPH — and how you can get your FREE OPH kit if you haven’t already — here.)

These OPH kits are being used by libertarian campus groups to discover libertarian-leaning students and welcome them to the liberty movement. Libertarian campus organizations are using OPH to sign up new members and supporters — new libertarian activists who will work in college and after graduation to bring liberty to all America.