“House of Cards” Is Alive and Real in Maryland

And you thought Netflix’s “House of Cards” was just 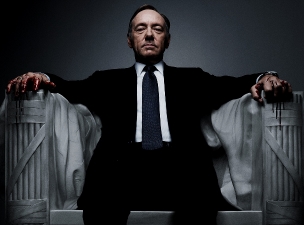 “A few weeks before Season 2 of ‘House of Cards’ debuted online, the show’s production company sent Maryland Gov. Martin O’Malley a letter with this warning: Give us millions more dollars in tax credits, or we will ‘break down our stage, sets and offices and set up in another state.’

“A similar letter went to the speaker of the House of Delegates, Michael E. Busch (D-Anne Arundel), whose wife, Cynthia, briefly appeared in an episode of the Netflix series about an unscrupulous politician — played by Kevin Spacey — who manipulates, threatens and kills to achieve revenge and power.”

Wow! You’ve got to wonder if Frank Underwood himself co-signed those letters.

But then the non-fiction bad guys struck back — with an Underwood-style threat to seize the company’s property if they stopped filming.

No kidding. The Maryland House of Delegates quickly drew up and passed legislation requiring the state to use eminent domain to buy or condemn property owned by a film company that has claimed more than $10 million in state tax credits — if said company stops filming. (Wonder if they had anyone specific in mind?)

Cato’s David Boaz sums it up just right: “It’s hard to imagine a better example of rent-seeking, crony capitalism, and conspiracy between the rich, the famous, and the powerful against the unorganized taxpayers. A perfect House of Cards story.”

Unfortunately, zillion-dollar tax money handouts to wealthy film companies are common practice in most states. All in the interest of creating jobs and stimulating the economy, of course.

In case anyone wants to know, the Tax Foundation reports that film tax incentives “are a net loss to states, and there are plenty of studies demonstrating this” and “every independent study has found that film tax credits lose revenue.”

Not that politicians care. Hey, it’s not their money.