(From the Intellectual Ammunition section in Volume 19, No. 5 of the Liberator Online. Subscribe here!) 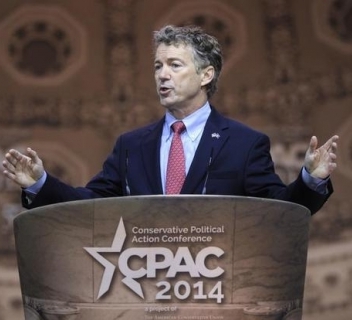 The headlines tell the story — and an exciting story it is.

The Conservative Political Action Committee (CPAC) is the nation’s largest annual gathering of conservative activists and office holders. A highlight of each convention is a presidential straw poll, closely watched as an indicator of where Republicans and the broadly-defined conservative movement are moving.

This year, Sen. Rand Paul of Kentucky simply ran away with the Saturday March 8 poll, winning a whopping 31 percent of the 2,459 votes.

No one else was even close. Sen. Ted Cruz came in a distance second with 11 percent of the vote. Trailing behind them in single digits was a host of big-name Republicans, including Chris Christie, Rick Santorum, Paul Ryan, Rick Perry, Sarah Palin, Mike Huckabee, and more.

It should be noted that the large number of younger activists who attend CPAC give the event a noticeable libertarian flavor. Rand Paul won last year’s poll as well, and his father Ron Paul won in 2010 and 2011.

Ron Paul’s CPAC victories previewed his historic 2012 race, which galvanized and mobilized the liberty movement. So Rand Paul’s sweeping victories last year and this year are widely seen as an indication of the growing political power of libertarian ideas.

On Friday night of the convention, Rand Paul delivered an electrifying speech that called for a liberty movement that would reach beyond the Republican party.

“It isn’t good enough to pick the lesser of two evils. We must elect men and women of principle, and conviction and action, who will lead us back to greatness. There is a great and tumultuous battle underway for the future, not of the Republican Party but the future of the entire country.

“The question is, will we be bold and proclaim our message with passion or will we be sunshine patriots retreating under adverse fire?”

Rand Paul’s speech was peppered with quotes from the Founders, anti-slavery activist William Lloyd Garrison, and other great freedom fighters of the past. Paul attacked indefinite detention, NSA data collection, violation of Fourth Amendment rights, and more in a rip-roaring libertarian defense of civil liberties.

You can see the entire speech here.

After the speech and its wildly enthusiastic reception by so many young activists, the Daily Beast wrote:

“The crowd loved [Rand Paul]. These were his people, and they were whooping and hollering and chanting and fist-pumping like it was Saturday night at the roller derby.

“By the time Rand wrapped it all up by calling on the crowd to ‘Stand with me! Stand together for liberty!’ at least half the room would have followed him down to the gates of hell if he’d asked.

“If I were among the conservative movement’s values voters or hawks, I’d be getting mighty nervous right about now.”