Worse and Worse: 101 Years of the Federal Income Tax

“The American income tax is perhaps the most dramatic example of how government grows at the expense of liberty,” said Grover Norquist, president of Americans for Tax Reform (ATR), last week. “Slowly. Constantly. Inexorably.”

Indeed, the 101-year history of the federal income tax has been marked by more and more taxpayers paying higher and higher amounts of tax, accompanied by ever-increasing complexity and confusion, as this chart from ATR shows: 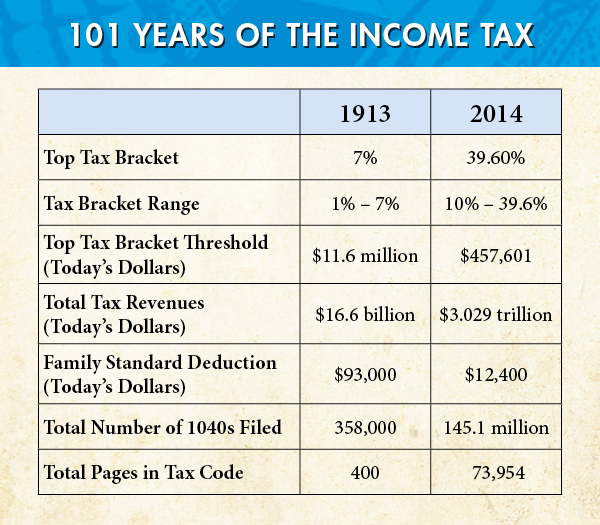 And that’s just the start. Consider the incredible burden and costs of compliance. According to the National Taxpayers Union (NTU)

NTU thus estimates the total compliance burden of the income tax is a horrific $224.3 billion. And that does NOT include “numerous hours taxpayers spend on state and local taxes, pursuing tax minimization strategies, or responding to IRS notices and audits; nor do they include the huge ‘growth penalty’ imposed on the nation’s economy by high tax rates.”

Then there are the numerous severe civil liberty problems with the income tax. “Ten Ways the Income Tax Harms Civil Liberties,” a short commentary by the Cato Institute’s Chris Edwards, summarizes some of them.

If you’re tired of this madness, why not start convincing your family, friends, neighbors and community leaders that it’s time to end the hated income tax — and replace it with… nothing.

Yes, it’s both fiscally and politically possible, as Ron Paul, Harry Browne, and many others have pointed out. In this article Advocates President Sharon Harris offers some some background info and suggestions to help you make that argument persuasively and effectively.