(From the Intellectual Ammunition section in Volume 19, No. 11 of the Liberator Online. Subscribe here!) 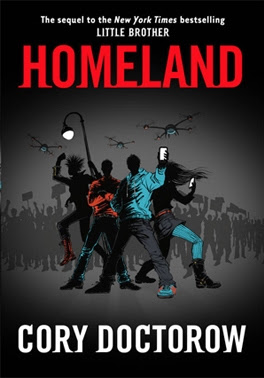 Want some great libertarian-oriented reading? The Libertarian Futurist Society has some new recommendations for you.

For more than three decades, the Libertarian Futurist Society has given its coveted annual Prometheus Awards, which celebrate outstanding current and classic works of science fiction and fantasy that stress the importance of liberty as the foundation for civilization, peace, prosperity, progress and justice.

This year’s Best Novel Award was a tie: Homeland by Cory Doctorow and Nexus by Ramez Naam.

FREE DOWNLOAD: Cory Doctorow has generously allowed readers to download Homeland — and some of his other works — for free here.

Homeland, the sequel to Doctorow’s 2009 Prometheus winner Little Brother, follows the continuing adventures of a government-brutalized young leader of a movement of tech-savvy hackers — who must decide whether to release an incendiary Wikileaks-style exposé of massive government abuse and corruption as part of a struggle against the invasive national-security state.

This is Doctorow’s third Prometheus Award for Best Novel. He won last year for his Pirate Cinema. All three are young-adult novels with strong libertarian themes.

Nexus by Ramez Naam is described as “a gripping exploration of politics and new extremes of both freedom and tyranny in a near future where emerging technology opens up unprecedented possibilities for mind control or personal liberation and interpersonal connection.”

The Best Classic Fiction (Hall of Fame) winner is Falling Free, a 1988 novel by Lois McMaster Bujold that explores free will and self-ownership by considering the legal and ethical implications of human genetic engineering.

Author-filksinger Leslie Fish — according to Prometheus “perhaps the most popular filk song writer of the past three decades and one who often includes pro-freedom themes in her songs” — will receive a Special Prometheus Award in 2014 for the combination of her 2013 libertarian-themed novella “Tower of Horses” and her related filk song, “The Horsetamer’s Daughter.” (No, that’s not a misspelling. Filk songs are songs created from within science fiction and fantasy fandom, usually dealing with related subject matter.)

The Prometheus Award will be presented in a ceremony during the 2014 World Science Fiction Convention, to be held in London, England August 14-18, 2014.