(From the Intellectual Ammunition section in Volume 19, No. 11 of the Liberator Online. Subscribe here!)

“The Uncovery” is a new online program by the American Civil Liberties Union designed to facilitate mass online activism in support of marijuana re-legalization. 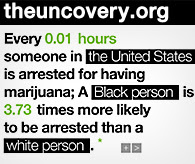 The Uncovery website lets users select facts about the failures of marijuana prohibition, both national and state by state, and convert these facts into customized graphic messages they can share on social media and send to legislators — all in sixty seconds or less.

Among the sobering facts offered by The Uncovery: