National Service: Should Young Americans Be Forced To Serve the Government?

(From the Ask Dr. Ruwart section in Volume 19, No. 12 of the Liberator Online. Subscribe here!) 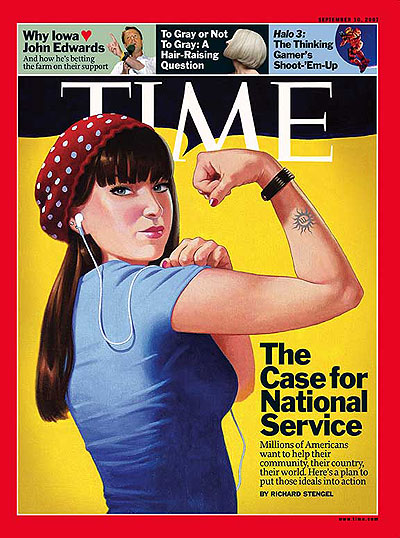 QUESTION: I believe we shouldn’t be forced to participate in some kind of national service. However, some of my friends say we owe some duty to our country for being born here and living here. What about a citizen’s duty to country?

MY SHORT ANSWER: If “doing our duty” is equated to providing “service,” who decides what is service and what is not? If young Steve Jobs had been forced into some type of national service instead of being left alone to tinker in his garage, he might never have invented the personal computer. The resulting increases in everyone’s standard of living would have been lost or delayed because of a bureaucrat’s uninformed decision about what was good for the country.

Freedom is what is good for a nation, especially one that wants to help its poor. More freedom means more wealth creation and less poverty. Government interference, even well-intended, backfires. (For some examples and more detail, see my book, “Healing Our World.” The 1992 edition is available as a free download at www.ruwart.com. The updated 2003 edition is available at the Advocates online bookstore.)

Most people give generously of their time and money if this is the voluntary custom. For example, tipping is not mandatory, but almost everyone does it. Before government got involved in social welfare, almost everyone helped a less fortunate neighbor individually or as part of a formal organization because that was the custom. You were either a charity case or a provider of charity; few people wanted to be in the former group.

To return to this way of charitable thinking, the government should stop forcing people to “give at the office” through taxation and resist the temptation to force people into service. Doing so will only create resentment towards those in need, leaving little sympathy for the poor when their “help” disappears in the shifting political tides.

* “Shhh… Don’t call Obama’s national service scheme a ‘draft‘” by Jerome Tuccille. National service is seemingly off the front burner, but don’t let down your guard; the idea continues to circulate. This article, written in 2008 when the idea was being more strongly pushed by both Democrats and Republicans, points out the insidious nature of the concept.

EXCERPT: “Under Barack Obama’s plan, a refusal to participate in a national service program touted at the federal level will be punished by the withholding of high school diplomas by the school district in your town. And without that diploma, few colleges or employers will even bother to look at your application.

“It’s a softer sort of authoritarianism which requires no draft boards, muddles the identity of the ‘bad guy’ and produces no martyrs in handcuffs for the evening news. You just can’t get a job if you don’t do as you’re told.”

* “National Service? Puh-lease” by Michael Kinsley, TIME, Sept. 04, 2007. Liberal journalist Kinsley does a great job of gutting the whole “national service” notion. Ignore the couple of paragraphs in the middle about democracy and taxation; the rest is brilliant and marvelously written.

EXCERPT: “Problem number one with grand schemes for universal voluntary public service is that they can’t be both universal and voluntary. If everybody has to do it, then it’s not voluntary, is it? And if it’s truly up to the individual, then it won’t be universal. What advocates of this sort of thing generally have in mind is using the pressures of social conformity and the powers of the state indirectly to remove as much freedom of choice as possible, while still being able to claim that everyone who signs up is a ‘volunteer.'”

Got questions?  Dr. Ruwart has answers! If you’d like answers to YOUR tough questions on libertarian issues, email Dr. Ruwart

Dr. Ruwart’s latest book Short Answers to the Tough Questions, Expanded Edition is available from the Advocates, as is her acclaimed classic Healing Our World.