(From the Intellectual Ammunition section in Volume 19, No. 12 of the Liberator Online. Subscribe here!) 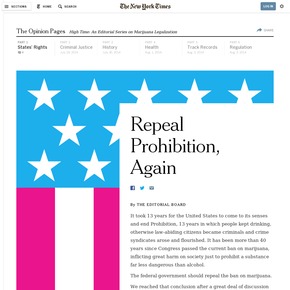 legalization, the New York Times editorial board has called for ending the federal war on marijuana.

“It took 13 years for the United States to come to its senses and end [alcohol] Prohibition, 13 years in which people kept drinking, otherwise law-abiding citizens became criminals and crime syndicates arose and flourished. It has been more than 40 years since Congress passed the current ban on marijuana, inflicting great harm on society just to prohibit a substance far less dangerous than alcohol.

“The federal government should repeal the ban on marijuana. …

“There are no perfect answers to people’s legitimate concerns about marijuana use. But neither are there such answers about tobacco or alcohol, and we believe that on every level — health effects, the impact on society and law-and-order issues — the balance falls squarely on the side of national legalization. That will put decisions on whether to allow recreational or medicinal production and use where it belongs — at the state level. …

“The social costs of the marijuana laws are vast. There were 658,000 arrests for marijuana possession in 2012, according to F.B.I. figures, compared with 256,000 for cocaine, heroin and their derivatives. Even worse, the result is racist, falling disproportionately on young black men, ruining their lives and creating new generations of career criminals.

“There is honest debate among scientists about the health effects of marijuana, but we believe that the evidence is overwhelming that addiction and dependence are relatively minor problems, especially compared with alcohol and tobacco. Moderate use of marijuana does not appear to pose a risk for otherwise healthy adults. Claims that marijuana is a gateway to more dangerous drugs are as fanciful as the ‘Reefer Madness’ images of murder, rape and suicide. …

“Creating systems for regulating manufacture, sale and marketing will be complex. But those problems are solvable, and would have long been dealt with had we as a nation not clung to the decision to make marijuana production and use a federal crime. …

“We recognize that this Congress is as unlikely to take action on marijuana as it has been on other big issues. But it is long past time to repeal this version of Prohibition.”

The Times followed with a six-part series on marijuana legalization, which can be found under the text of their editorial.

Ethan Nadelmann, executive director of the Drug Policy Alliance,commented on the groundbreaking editorial:

“This is of historic consequence — far bigger than most people assume. Some people in the country may perceive the Times editorial page as a liberal organ, but they should know that on this issue they’ve been cautious to a fault, even conservative. So for them to write what they did, at this juncture, demonstrated intellectual and moral clarity as well as courage.”

It should also be noted that what the New York Times is calling for is what the Libertarian Party and Ron Paul in his presidential campaigns called for — many years earlier.