How He Did It: Two Hundred New Libertarian Students Recruited — in One Semester

(From the President’s Corner section in Volume 19, No. 12 of the Liberator Online. Subscribe here!) 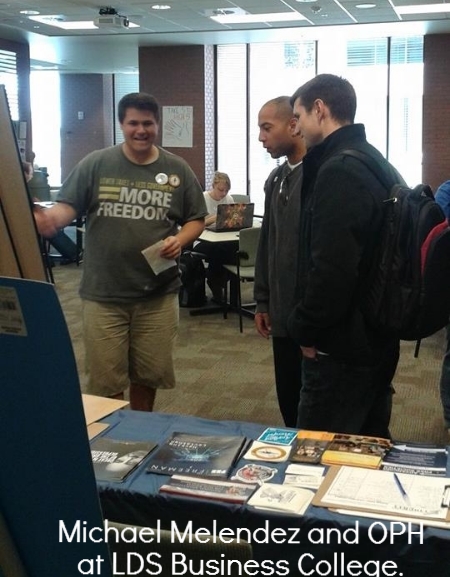 I was delighted to get this email from Michael Melendez, Young Americans for Liberty State Chair in Utah:

In one semester, I recruited more than 200 students on campuses all over the state of Utah.

There is no tool more effective for a campus liberty activist than the Operation Politically Homeless (OPH) kit.

I just ordered another OPH kit. Thank you!

I had the pleasure of meeting Michael at the November 2013 Utah Student Liberty Forum, where I conducted a libertarian communication workshop. Currently a student at Brigham Young University (BYU), Michael has been active locally with Campaign for Liberty since 2009. He was chief-of-staff for Senator Howard Stephenson in the Utah State Senate during the 2014 legislative session. Michael founded a Young Americans for Liberty (YAL) chapter at BYU in 2011 and was made a YAL chair for the state of Utah in January of 2013. He also served as a Campus Coordinator for Students For Liberty (SFL) during the 2013-2014 school year. Whew!

Michael is a great example of the new generation of libertarian activists who are making liberty once again a burning issue in American politics.

And — as his quote indicates — he’s using the Advocates’ OPH to find hundreds more young people to join in this great crusade.

OPH is the Advocates’ acclaimed “event in a kit” that enables libertarian groups to quickly and efficiently discover dozens or even hundreds of libertarian-leaning people in their communities or on their campuses — and get their contact information and sign them up!

OPH is one of the great success stories of the libertarian movement. Hundreds of thousands of people have encountered the ideas of liberty through OPH. And millions more people are out there, just waiting for someone — maybe you? — to introduce them to libertarianism.

OPH works like magic. Wherever people are gathered, OPH will attract them. It turns an ordinary (yawn) ho-hum outreach booth into a crowd-drawing fun event! Bonus: it’s fun!

FREE OPH KITS for libertarian student groups: The Advocates is giving OPH outreach kits free to student libertarian groups. All we ask is that you use them at least three times during the next year and send us photos documenting your OPH activity. OPH normally sells for $50.00 plus shipping. Learn how campus libertarian groups are doubling and tripling their membership with OPH here.

Right now is a great time to do OPH! As students return to school, as freshman begin exploring ideas and organizations on campus, use OPH to open their minds to liberty and welcome them to your campus liberty organization.

Could your libertarian group benefit from dozens — or even hundreds — of new sign-ups? How much stronger would the liberty movement be if hundreds of OPHs were conducted across America this year — discovering thousands of eager new libertarian activists, supporters, donors and voters?

It’s up to you! Start now by learning more about OPH!