Is Liberty Doomed — or Inevitable?

(From the President’s Corner section in Volume 19, No. 15 of the Liberator Online. Subscribe here!)

I’ve heard both of these arguments for many years:

1.) “The libertarian cause is doomed. People will never understand liberty; even those who do understand it don’t want it. So why should I waste my time in such a futile cause?”

2.) “Libertarianism is certain to succeed. The state cannot out-compete the marketplace. Given time, the superiority of the market will inevitably lead to a libertarian society. So why should I spend my time working on what will come about inevitably anyway?”

Ironically, both arguments lead many people to stop working for liberty, to stop supporting libertarian causes, to turn their back on the freedom movement.

I think both arguments are wrong.

I certainly believe that liberty is winning — in fact, our ideas are spreading at an incredible pace. I speak from experience. I’ve been in the libertarian movement since the early 1970s, when almost no one believed these ideas — when the joke used to be: “How many libertarians can fit into a phone booth? Answer: all of them.”

Today no one would even understand that joke. Libertarians are everywhere, and libertarianism is constantly discussed in the media. It’s nothing less than a sea change — a true rEVOLution.

Sure, I wish things were moving even faster. But the logic of our ideas is winning us converts daily, while the Big Government left and right are increasingly seen as bankrupt.

But liberty is NOT inevitable. Our ideas are fighting other powerful ideas and movements in the marketplace of ideas. There’s no guarantee those ideas won’t defeat our own. Their proponents are certainty trying hard to make that happen. Have you noticed the many attacks on libertarianism recently, by scholars, journalists, pundits, politicians, and other influential people?

A major reason libertarianism has seen such great success in recent years is because untold thousands of people have worked so hard, and contributed so much, to bring us to this point.

You yourself learned about liberty from someone. Maybe someone gave you a copy of the 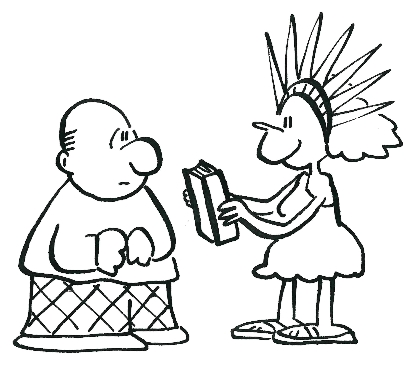 Maybe you heard a libertarian candidate or speaker on television or radio.

Maybe you read a book or article written by a libertarian writer.

However you learned about libertarianism, it was because someone, in some way, reached out to you. That person, too, learned from someone else.

And that outreach was backed up by a network of libertarian organizations that have worked for decades to create a powerful movement ready with information and opportunities for people who want to make a difference in the world.

Those organizations didn’t spring up out of the ground by magic. They were only possible because someone — someone like you — years ago decided that this cause was so important they wanted to make sure these organizations existed, so that people like you could learn about liberty and the liberty movement.

For almost thirty years the Advocates has been a vital part of the libertarian movement. Our mission is a unique one. We help people encounter and learn about the ideas of liberty — and we provide them with the best methods and tools to help them, in turn, take those ideas to others.

The Advocates has helped millions of people encounter, evaluate and embrace the ideas of liberty. And we’ve helped countless libertarians become highly successful in convincing others to accept these ideas.

Our World’s Smallest Political Quiz has been taken online over 22 million times. Thousands of people take it each month, learning more about their political views and discovering libertarianism.

The Quiz has reached additional millions through newspapers, magazines, OPH booths, over 10 million card copies, textbooks, talk radio, and many other ways.

The Liberator Online — you’re reading it right now — takes information about liberty, the liberty movement, and the best ways to communicate libertarian ideas to over 30,000 subscribers.

We reach out in many other ways, too. New technology offers incredible opportunities. I recently did an online communication seminar from my office in Georgia with a group of libertarian students in Arizona. That would have been inconceivable just a few years ago.

But it still comes down to you. You — your activism, your donations, your outreach to friends, neighbors, families and others — make the work of the Advocates, and the growth of the liberty movement, possible.

Your participation is vital. The future of liberty — for yourself, your family, the world — will be shaped by the actions of the libertarians of today.

This is incredibly important. Liberty matters. The lives and well-being of millions of people are at stake.

Your efforts make a difference. Your participation in the struggle is essential.

“No one can find a safe way out for himself if society is sweeping towards destruction. Therefore everyone, in his own interests, must thrust himself vigorously into the intellectual battle. None can stand aside with unconcern; the interests of everyone hang on the result.”

Victory is NOT inevitable. But our ideas are moving forward, and there is great reason for optimism.

When you contribute to the work of the Advocates — or other worthy libertarian organizations — you are helping move the world in the right direction. You are making a real difference.

Just as someone, once, did for you.