(From the President’s Corner section in Volume 19, No. 18 of the Liberator Online. Subscribe here!)

“Have You Significantly Changed Your Political Views Since Age 18? If So, How?” 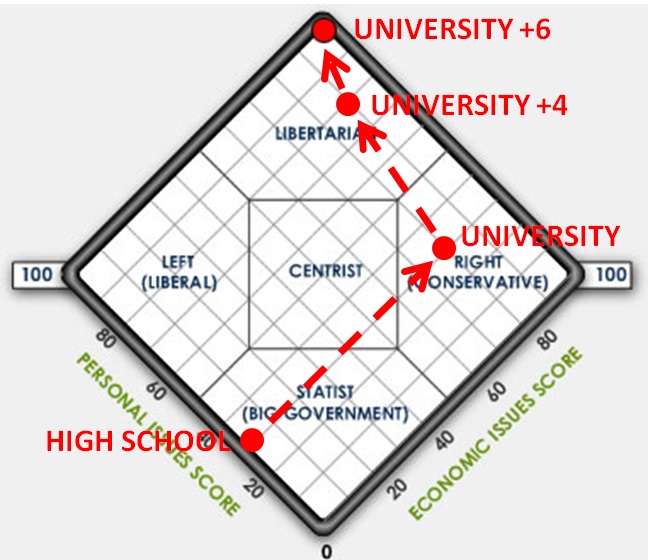 That the title of a fascinating article at Forbes.com featuring the World’s Smallest Political Quiz.

In it, economist Michael F. Cannon describes his intellectual journey from Big Government “socially conservative social democrat” in high school to socially conservative/free market-oriented university student… and finally, a few years later, to where he is today: a full-fledged libertarian, solidly in favor of civil liberties, free markets, and a non-interventionist foreign policy.

Indeed, Cannon not only became a libertarian — he has become a remarkably influential one. He is director of health policy studies at the libertarian Cato Institute. Though not a Republican, he served as a domestic policy analyst for the U.S. Senate Republican Policy Committee, advising the Senate leadership on health, education, labor, welfare, and the Second Amendment. His work has been featured in many of America’s most influential newspapers and magazines, and he has appeared ABC, CBS, CNN, CNBC, C-SPAN, Fox News Channel and NPR.

To illustrate his personal ideological journey, Cannon uses… the World’s Smallest Political Quiz. He draws different Quiz scores on the Quiz to indicate how he would have scored at different times in his life, thus creating the striking visual map of his political awakening that I’ve reprinted in this column.

I’ve never seen this done before. But the Quiz is a perfect — and crystal-clear — way to document and illustrate this. Kudos to Cannon for thinking of this!

I know over the past few decades, as libertarian ideas have spread, many millions of people have made intellectual journeys very similar to Cannon’s. (And for millions of them, the Quiz itself has been an important part of their intellectual awakening.) Whether starting from the left or the right, more and more Americans are finding themselves drawn to the logic, consistency and compassion of libertarianism.

Check Cannon’s article out — and consider using the Quiz to document and share the story of your own journey.