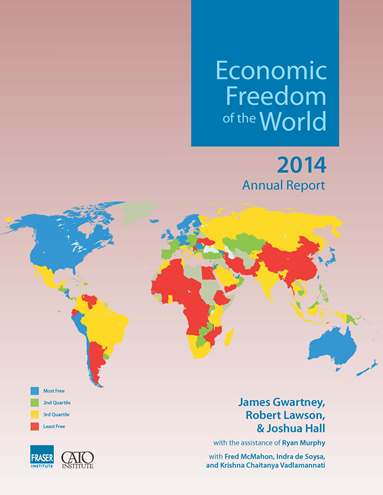 Economic liberty — essential for human progress and well-being — has dropped significantly worldwide. And the United States — once the very symbol of economic freedom — has fallen behind many other countries in this crucial area.

That’s the disturbing finding of the 18th annual Economic Freedom of the World Annual Report, a highly-regarded measuring of economic freedom around the world.

The annual study is prepared by the Economic Freedom Network, a group of independent research and educational institutes in nearly 90 nations and territories worldwide. The group describes their report as “the world’s premier measurement of economic freedom.”

The report defines the cornerstones of economic freedom as: personal choice, voluntary exchange, freedom to compete, and security of private property.

Each year’s report ranks the nation of the world in relation to one another, and assigns a score from zero to ten on the amount of liberty in each nation.

This year’s study covers the year 2012, the most recent year for which the data is available.

It reports that the United States, “long considered the standard bearer for economic freedom among large industrial nations, has experienced a substantial decline in economic freedom during the past decade.”

The fall has been fast. From 1980 to 2000, the U.S. was generally rated the third-freest economy in the world, ranking behind only Hong Kong and Singapore.

However, in this year’s study the United States now ranks 12th in the world, tied with the United Kingdom and behind countries including Canada, Jordan and the United Arab Emirates.

More disturbing than the rankings is the U.S. score of 7.81, which shows a continuing pattern of losing economic freedom. After generally rising from 1980 to reach second place and a score of 8.55 in 2000, the U.S. has now fallen considerably lower.

The reasons? According to the study: “Due to a weakening rule of law, increasing regulation, and the ramifications of wars on terrorism and drugs, the United States has seen its economic freedom score plummet in recent years, compared to 2000 when it ranked second globally.”

Worldwide economic freedom dropped slightly in this year’s report, and it remains well below its peak level of 6.92 in 2007. The average score fell to 6.84.

These scores are extraordinarily important, because, as the report shows, economic liberty is literally a matter of life and death. Extensive research shows that people living in countries with high levels of economic freedom enjoy greater prosperity, more political and civil liberties, and longer life spans.

As the report notes: “Nations in the top quartile of economic freedom had an average per capita GDP of $39,899 in 2012, compared to $6,253 for bottom quartile nations. Moreover, life expectancy is 79.9 years in the top quartile compared to 63.2 years in the bottom quartile, and political and civil liberties are considerably higher in economically free nations than in unfree nations.”

Further, the poorest 10 per cent of people in the freest nations are nearly twice as prosperous as the average population of the countries with the least economic freedom.

The 10 lowest-rated countries for economic freedom are: Myanmar, Democratic Republic of Congo, Burundi, Chad, Iran, Algeria, Argentina, Zimbabwe, Republic of Congo, and, lastly, Venezuela. (North Korea and Cuba could not be included because data was unavailable.)

“The link between economic freedom and prosperity is undeniable,” said Fred McMahon of the Fraser Institute, one of the institutes involved in producing the report. “The most economically free countries offer the highest quality of life and personal freedoms, while the lowest-ranked countries are usually burdened by oppressive regimes that limit the freedom and opportunity of their citizens.”

The report is available free online.