How Free Enterprise Saved the Pilgrims: A Thanksgiving Story

(From the Intellectual Ammunition section in Volume 19, No. 22 of the Liberator Online. Subscribe here!)

Thanksgiving Day is a great time to remember, and share with others, the too- 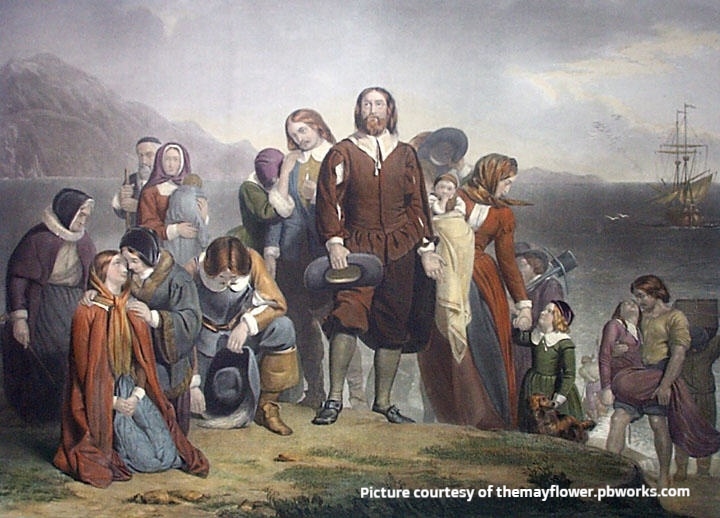 little-known story of how the Pilgrims discovered and embraced the power of individual incentives and private property — and how doing this saved them from looming starvation and death.

This story has been told in many different forms over the years, and some critics have challenged versions of it. Our thanks to the Cato Institute’s Daniel Griswold for sharing a definitive version of the story, from the work of one of America’s most respected and honored historians.

Historian Nathaniel Philbrick has won numerous prestigious awards for his books. His acclaimed 2007 book Mayflower: A Story of Courage, Community, and War was a New York Times Bestseller, a finalist for both the 2007 Pulitzer Prize in History and the Los Angeles Times Book Award, and was named one of the ten “Best Books of the Year” by the New York Times Book Review.

A passage from that book succinctly tells the story of how free enterprise principles and incentives saved the Pilgrims.

“The fall of 1623 marked the end of Plymouth’s debilitating food shortages. For the last two planting seasons, the Pilgrims had grown crops communally — the approach first used at Jamestown and other English settlements. But as the disastrous harvest of the previous fall had shown, something drastic needed to be done to increase the annual yield.

“In April, [Plymouth Colony governor William] Bradford had decided that each household should be assigned its own plot to cultivate, with the understanding that each family kept whatever it grew.

“The change in attitude was stunning. Families were now willing to work much harder than they had ever worked before. In previous years, the men had tended the fields while the women tended the children at home.

“‘The women now went willingly into the field,’ Bradford wrote, ‘and took their little ones with them to set corn.'”

“The Pilgrims had stumbled on the power of capitalism. Although the fortunes of the colony still teetered precariously in the years ahead, the inhabitants never again starved.”

Governor Bradford tells the story himself in his book History of Plymouth Plantation, taken from his journals kept between 1630 and 1651, and recognized today as an American classic. Bradford describes the problems of the communal system (spelling has been modernized):

“For this community [of food and property] . . . was found to breed much confusion and discontentment, and retard much employment that would have been to their benefit and comfort . . .

“For the young men that were most able and fit for labor and service did repine that they should spend their time and strength to work for other men’s wives and children without any recompense. The strong . . . had no more in division . . . than he that was weak and not able to do a quarter the other could; this was thought injustice. The aged and graver men to be ranked and equalized in labors and victuals, clothes, etc . . . thought it some indignity and disrespect unto them. And men’s wives to be commanded to do service for other men, as dressing their meat, washing their clothes, etc., they deemed it a kind of slavery, neither could many husbands well brook it.”

Bradford then describes the dramatic results of the shift to private plots and individual incentives:

“This had very good success; for it made all hands very industrious, so as much more corn was planted than otherwise would have been by any means the Governor or any other could use, and saved him a great deal of trouble, and gave far better content. The women now went willingly into the field, and took their little ones with them to set corn, which before would allege weakness and inability, whom to have compelled would have been thought great tyranny and oppression.”

As we celebrate Thanksgiving this year, we should remember that our great abundance today is based upon our system of private property rights and free enterprise. Principles that the Pilgrims discovered for themselves, in rudimentary form, and began putting into practice nearly four hundred years ago.

Those principles saved their lives. Eventually, they made America the freest and most abundant country in human history. Today they offer the promise of still greater blessings to come.

And that’s something to be very thankful for — this and every Thanksgiving.