Your Tax Dollars Paid for Swedish Massages for Rabbits

(From the Intellectual Ammunition section in Volume 19, No. 19 of the Liberator Online. Subscribe here!)

Politicians are warning us that the government is broke. It’s time for higher taxes and belt-tightening. Citizens need to pay more and expect less.

But still, our leaders heroically scraped together funding for the most important, the most fundamental, the most essential government functions.

Yep. The National Institutes of Health spent $387,000 on this project. Yes, that’s the same NIH whose director says they “probably” would have come up with a vaccine for Ebola by now, if it wasn’t for low funding (they only get $30 billion a year). 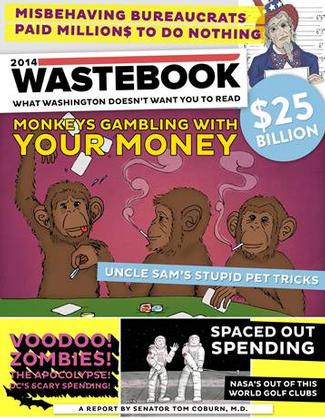 Total bill for these one hundred projects? A whopping $25 billion. And, Sen. Coburn warns, this is “just a fraction of the countless frivolous projects the government funded in the past twelve months — with borrowed money and your tax dollars.”

Sen. Coburn further notes: “Despite all of this obvious waste, Washington politicians celebrated ending the fiscal year with a deficit under half-a-trillion dollars for the first time since 2008 — as if adding $486 billion to a national debt quickly approaching $18 trillion is an actual accomplishment deserving praise.”

Here are a few more choice items from Coburn’s Wastebook 2014:

Just skimming the table of contents rewards you with items like these below. And each one is accompanied by a jaw-dropping description that will have you thinking you’re reading the humorous parody site The Onion:

Page after page, the idiocy and waste goes on and on. Read the whole thing here.