(From the Intellectual Ammunition section in Volume 19, No. 23 of the Liberator Online. Subscribe here!)

A just-released study shows that U.S. states with economic liberty benefit greatly from it, while residents of states with less economic freedom suffer badly from the lack of it.

Economic Freedom of North America 2014 is an annual report by Canada’s Fraser Institute that measures levels of economic freedom, and thus economic opportunity, in the 50 states (as well as Canada and Mexico). 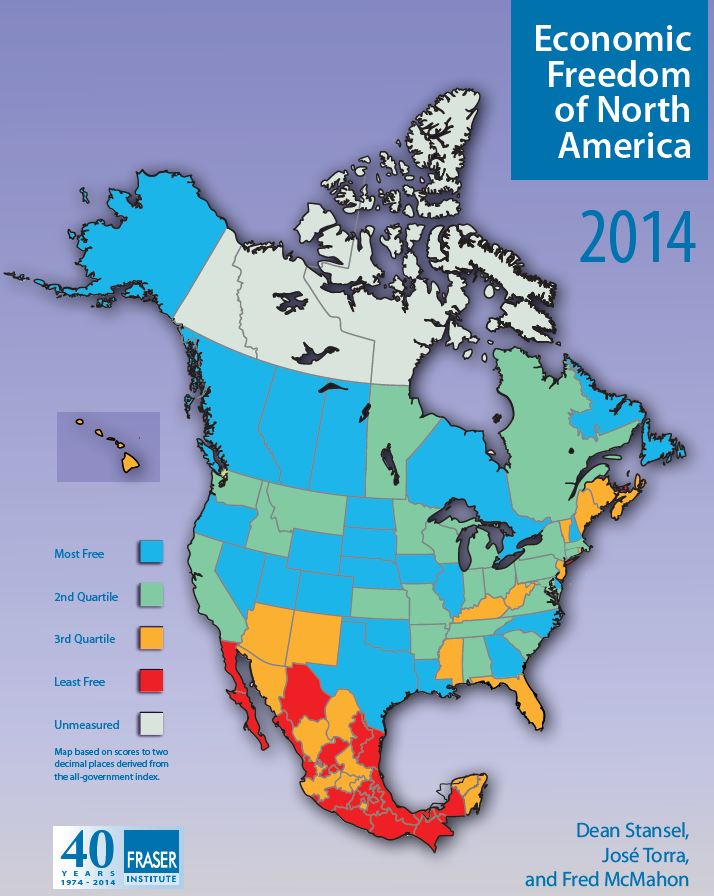 The report defines “economic freedom” as “the ability of individuals to act in the economic sphere free of undue restrictions.”

“In the three most-free states (Texas, South Dakota, and North Dakota) average personal income is about 20 percent higher than in the three least-free states (Maine, Vermont, and Mississippi) — approximately $48,000 versus $40,000. And the unemployment rate is more than seven percent in Rhode Island (45th) versus about four percent in nearby New Hampshire (5th).

“Furthermore, cities in low-freedom states like California (43rd), Michigan (37th), and Rhode Island have made headlines in recent years for declaring bankruptcy, whereas cities in high-freedom states like Nebraska (5th), Texas, and the Dakotas, have seen incomes and their tax bases expand.

“The research is clear: Where economic freedom is high and rising, the number of jobs is expanding and the economy is vibrant and growing. Where it’s low and declining, the economy is stagnant, limiting opportunity and quality of life for residents of those states.

“Big, costly government at the expense of the people doesn’t work. It leads to economic decline. In contrast, expanding economic freedom increases economic opportunity and provides the path to economic prosperity.”

The report ranks economic freedom along a scale of 1 (lowest) to 10 (full economic liberty). This brings a warning: “Historically, economic freedom has been declining in all three countries. Since 2000, the average score for Canadian provinces on the all-governments index has fallen from 7.8 to 7.6; the number for U.S. states was 8.2 to 7.5.”