Marijuana Re-Legalization: Its Effects on Teens

(From the Activist Ammunition section in Volume 20, No. 2 of the Liberator Online. Subscribe here!)

One of the most often-heard arguments against marijuana re-legalization is fear it will encourage marijuana use by teens. 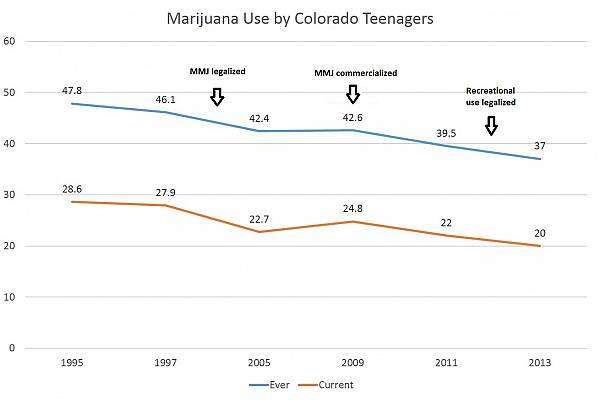 However, reports Paul Armentano, Deputy Director of NORML (National Organization for the Reform of Marijuana Laws), several recent significant studies indicate that hasn’t been the case thus far. Studies indicate no connection between legalization of medical marijuana and teen use. Studies also find a recent decrease in teen use nationwide — including Colorado, which legalized marijuana in 2012.

Finally, a new article in Rolling Stone makes the controversial argument that decriminalization in California has brought enormous benefits to teens and to the state as a whole, by removing teen offenders from the criminal justice system.

Armentano first points to the University of Michigan’s highly regarded Monitoring the Future study, which tracks trends in substance use among students in 8th, 10th and 12th grades. Each year the national study, now in its 40th year, surveys 40,000 to 50,000 students in about 400 secondary schools throughout the United States.

This year Monitoring the Future found that marijuana use among teens declined slightly in 2014, with use in the prior 12 months declining from 26 percent to 24 percent. This small but significant decline follows five years of increasing use.

Armentano also reports on Colorado, which re-legalized marijuana in 2012: “Separate data published earlier this year by the Colorado Department of Public Health & Environment similarly found that fewer high-school students are consuming cannabis, despite voters’ decision in 2012 to legalize the possession, production, and sale of the plant to adults.

“According to the survey, the percentage of Colorado high schoolers reporting having consumed marijuana within the past 30 days fell from 22 percent in 2011 to 20 percent in 2013. High school students’ lifetime use of cannabis declined from 39 percent to 37 percent during the same two years.”

(For an excellent analysis of this report, see “Despite Legalization, Colorado Teenagers Stubbornly Refuse to Smoke More Pot” by Jacob Sullum of Reason magazine.)

What about states that legalized marijuana for medical use? Armentano reports on a July 2014 paper by the nonpartisan National Bureau of Economic Research that examined federal data on youth marijuana use and treatment episodes for the years 1993 to 2011 — a time period when 16 states authorized medical cannabis use.

The study concluded: “Our results are not consistent with the hypothesis that the legalization of medical marijuana caused an increase in the use of marijuana among high school students.”

As Jacob Sullum of Reason points out, these studies are consistent with earlier data from the Center for Disease Control’s Youth Risk Behavior Surveys from 1993 through 2011, which show little evidence of any connection between legalizing marijuana for medical use and the use of marijuana by high school students.

“Study: Legalizing medical marijuana has not increased teen pot use” was a headline in the April 24, 2014 Washington Post. According to the article: “the first comprehensive study of teen drug use in the states where marijuana is available for medical uses shows that [increased teen use] just hasn’t happened.”

The Washington Post was reporting on a study in the Journal of Adolescent Health. The authors of the study conclude: “Our study suggests that — at least thus far — the legalization of marijuana for medical purposes has not increased adolescent marijuana use, a finding supported by a growing body of literature.”

Decriminalization has also had major benefits for youth in California, reports Rolling Stone magazine in an article entitled “The War on Drugs Is Burning Out” by Tim Dickinson, January 8, 2015.

In late 2010 California decriminalized the possession of small amounts of marijuana. Possession of up to an ounce of marijuana became an infraction, like a parking ticket, with a maximum $100 fine.

Importantly, notes Rolling Stone, the law applied to users of any age — not just those 21 and over.

“The impact of this tweak has been remarkable,” Rolling Stone says.

“By removing low-level youth pot offenses from the criminal-justice system, overall youth crime has plummeted by nearly 30 percent in California — to levels not seen since the Eisenhower administration.

“And decriminalization didn’t lead to any of the harms foretold by prohibitionists. Quite the opposite: Since the law passed in 2010, the rate of both high school dropouts and youth drug overdoses are down by 20 percent, according to a new research report from the Center on Juvenile and Criminal Justice. Non-marijuana drug arrests for California youth, meanwhile, are also down 23 percent — fully debunking the gateway theory.

“Decriminalization in California, the report [from the Center on Juvenile and Criminal Justice] concludes, has reduced the harms of prohibition for thousands of California teens. ‘Fewer young people, its authors write, ‘are suffering the damages and costs of criminal arrest, prosecution, incarceration, fines, loss of federal aid and other punishments.'”

The authors also point out that perhaps the most important result of decimalization is that it gives police “one less pretext to disrupt the lives” of young blacks.