(From the President’s Corner section in Volume 20, No. 4 of the Liberator Online. Subscribe here!) 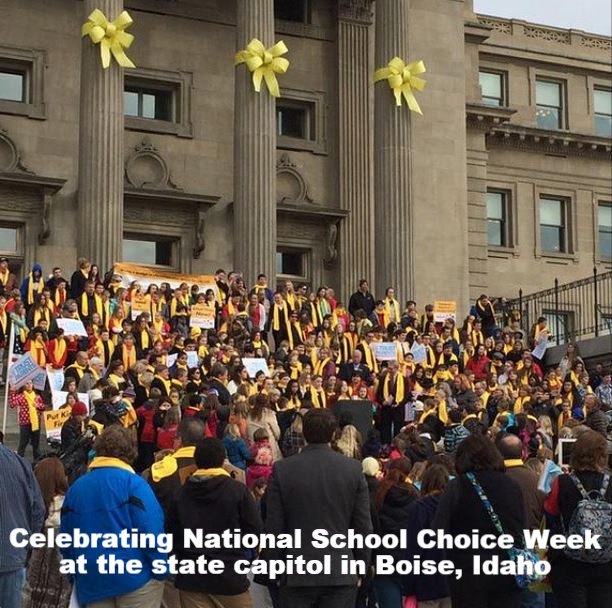 This week (January 25 to 31) is National School Choice Week, a non-partisan public awareness effort designed to “shine a positive spotlight on the need for effective education options for all children.”

I wasn’t aware of the scope of this project until just recently, but it is huge. And this year is its biggest, highest-profile celebration yet.

Millions of Americans in all 50 states will participate in more than 11,000 unique independently planned and independently funded events and activities celebrating school choice. These events will range from open houses and talent shows at schools to 5k runs and rallies on the steps of state capitols.

National School Choice Week doesn’t focus on a single tactic or solution for increasing education choice and quality. Instead, it focuses on bringing public awareness to this issue and, in doing so, creating a mass movement for the broad goals of education choice and diversity.

As the group says: “Participants in National School Choice Week believe that parents should be empowered to choose the best educational environments for their children. Supporters plan events that highlight a variety of school choice options — from traditional public schools to public charter schools, magnet schools, private schools, online learning, and homeschooling — while uniting with like-minded groups and individuals across the country.”

One of the resources that National School Choice Week offers is a national map that provides facts about school choice in each state. Click on a state on the map and discover the types of school choice available — and not available — to families in that state. Great resource! Check it out.

The growth of such a mass movement for liberty in education is heartening. And support is strong and growing fast, as this Beck Research national survey of likely 2016 voters proves:

“When asked, ‘Generally speaking, would you say you favor or oppose the concept of school choice? School choice gives parents the right to use the tax dollars associated with their child’s education to send their child to the public or private school which better serves their needs,’ fully 69% support school choice, including 45% who strongly support it, while 27% oppose it. School choice support has strong support across partisan lines; 60% of Democrats, 67% of Independents and 81% of Republicans back it.”

Of course, the ultimate goal for libertarians is what Advocates Founder and education reform pioneer Marshall Fritz called “separation of school and state.”

I’ll finish by quoting from a recent column by Ron Paul inspired by National School Choice Week. As usual, Paul gets straight to the heart of the matter:

“If Congress was serious about improving education it would shut down the Department of Education. … So as long as federal education programs exist, school children will be used as guinea pigs for federal bureaucrats who think they are capable of creating a curriculum suitable for every child in the country. …

“It would also shut down all other unconstitutional bureaucracies, end our interventionist foreign policy, and reform monetary policy so parents would have the resources to provide their children with an education that fits their children’s unique needs.

“These reforms would allow more parents access to education options such as private or religious schools, and also homeschooling.”