(From the Activist Ammunition section in Volume 20, No. 5 of the Liberator Online. Subscribe here!)

Surprise! There’s at least one great — and solidly libertarian — idea in President Barac 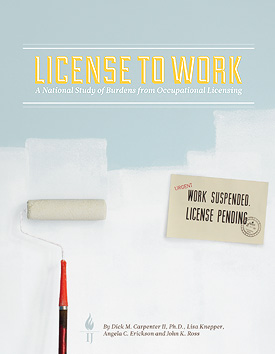 Obama’s 2015 budget: cutting back the plague of occupational licensing.

President Obama proposes a $15 million in grants to states for “identifying, exploring, and addressing areas where occupational licensing requirements create an unnecessary barrier to labor market entry or labor mobility…”

This is yet another example of a libertarian/free market idea bursting into the mainstream.

Libertarians at the Institute for Justice, the Reason Foundation and elsewhere have long pointed out the harm of occupational licensing requirements.

Of course, supporters of occupational licensing argue it is needed to protect the public from unscrupulous or incompetent practitioners.

However, reports the Institute for Justice: “Research to date — on occupations as diverse as school teachers, interior designers, mortgage brokers, dentists, physicians and others — provides little evidence that government licenses protect public health and safety or improve the quality of products or services.”

“These laws are created under the guise of ‘helping’ consumers,” wrote Adam B. Summers of the Reason Foundation in a 2007 study. “In reality, the laws are helping existing businesses keep out competition, restricting consumer choice, destroying entrepreneurship, and driving up prices.”

Further, many of these occupations are in fields where, in the past, the poor, immigrants and other challenged workers — those with the least resources — have been able to get a toehold in the economy.

To learn more, check out these resources:

“People who want to work, start businesses and make a living shouldn’t have to ask the government for permission to do so. Consumers can take care of themselves, especially with our sharing economy and the easy feedback mechanisms it offers. …