The Greatest Libertarian Accomplishment in History?

(From the President’s Corner section in Volume 20, No. 8 of the Liberator Online. Subscribe here!)

What is the most important libertarian accomplishment in history?

Not long ago David Boaz of the Cato Institute was asked that question.

His response? “The abolition of slavery.”

“The greatest libertarian crusade in history was the effort to abolish chattel slavery, culminating in the nineteenth-century abolitionist movement and the heroic Underground Railroad,” Boaz wrote recently at Huffington Post. “It’s no accident that abolitionism emerged out of the ferment of the Industrial Revolution and the American Revolution.

“How could Americans proclaim that ‘all men are created equal … endowed by their Creator with certain unalienable rights,’ without noticing that they themselves were holding other men and women in bondage? They could not, of course. The ideas of the American Revolution — individualism, natural rights and free markets — led logically to agitation for the extension of civil and political rights to those who had been excluded from liberty, as they were from power — notably slaves, serfs and women. …

“In the United States, the abolitionist movement was naturally led by libertarians. Leading abolitionists called slavery ‘man stealing,’ in that it sought to deny self-ownership and steal a man’s very self. Their arguments paralleled those of John Locke and the libertarian agitators known as the Levellers. William Lloyd Garrison wrote that his goal was not just the abolition of slavery but ‘the emancipation of our whole race from the dominion of man, from the thraldom of self, from the government of brute force.'”

That’s a great answer, just the kind you might expect from the editor of The Libertarian Reader, an 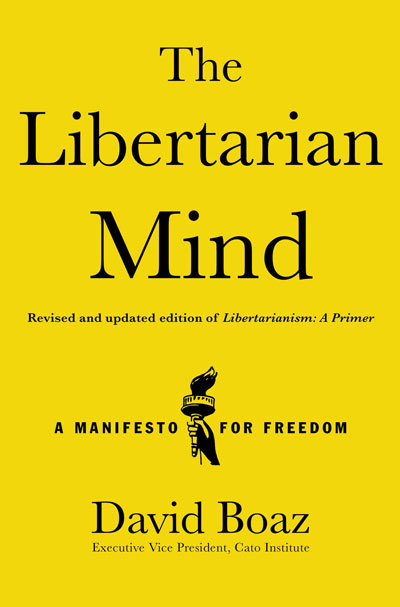 Boaz is also the author of a new book, The Libertarian Mind: A Manifesto for Freedom, which has just been released. It’s an updated version of his classic book Libertarianism: A Primer, one of the best examinations of libertarianism available, which gathered worldwide praise. I highly recommend it.

I also highly recommend the rest of Boaz’s article, “Black History Is American History.” Next year, when Black History Month comes around, I expect it will be high on my list of suggested resources for libertarians to read and share.