The Piketty Challenge to Capitalism

(From the Intellectual Ammunition section in Volume 19, No. 8 of the Liberator Online. Subscribe here!) 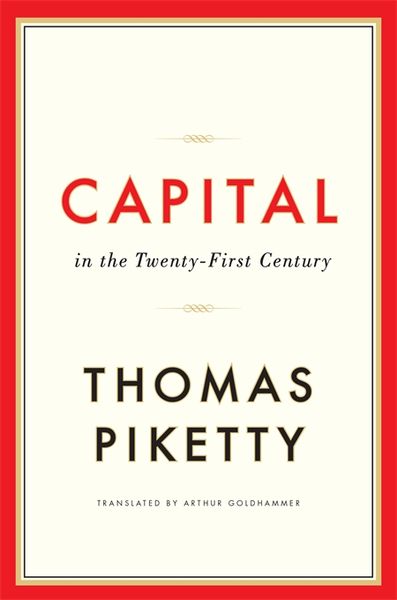 Seems like everybody is talking about French left-wing economist Thomas Piketty’s new book Capital in the Twenty-First Century.

It rocketed to the top of the New York Times bestseller list.

Lefty pundit Paul Krugman hails it as “the most important economics book of the year — and maybe the decade.”

An Esquire review was entitled “The Most Important Book of the Twenty-First Century.”

Even the Pope tweeted a thumbs-up to the Piketty thesis: “Inequality is the source of social evil.”

No doubt about it: proponents of massive government intervention and coercive wealth distribution are praising Thomas Piketty’s new book to the skies.

Piketty’s tome is seen as a devastating criticism of the very fundamentals of capitalism. Basically, Piketty examines an enormous amount of historical economic data to conclude that capitalism inevitably, over time, promotes huge inequalities in wealth. This wealth becomes ever more concentrated in just a tiny percentage of the population, leaving the rest of us far poorer and far less powerful politically.

This inequality, Piketty believes, poses a serious threat to the people of the world (except the wealthy). The solution? Although he himself suggests it is probably unrealistic, at least for the moment, he urges a massive worldwide tax on wealth to radically reduce income inequality.

And what a tax it is! For the U.S. Piketty wants a steeply progressive income tax with a top rate of 80% on incomes starting at around $500,000 or $1 million, as well as a 50%-60% tax rate on incomes as low as $200,000, which he confidently asserts “would not reduce the growth of the US economy.” To make sure the beast of inequality remains slain, he suggests an annual wealth tax up to 10% on the largest fortunes, and grabbing up to 20% of lesser estates.

No, he’s not kidding. And the main purpose of this tax is not to flood governments with revenue — though it would, at least at first — but simply to reduce income inequality. Indeed, he has surprisingly little concern with how inefficiently or destructively government might use this money.

These proposals may sound downright insane to libertarians and other market advocates, but at the moment Piketty’s book is sweeping the country. So libertarians will want to learn about this latest challenge to liberty and why Piketty’s arguments against economic liberty are dangerous and wrong.

Here are some good short, very readable places to start:

Excerpt: “Piketty’s solutions would undoubtedly yield a more equal society, but also one that was remarkably poorer.”

Excerpt: “The likely result of this utopian scheme would be to drive creative people out of high-tax countries, slow economic growth, and make societies poorer in the long run.”

Excerpt: “Perhaps the most astonishing claim in Piketty’s book is that government bureaucracies need to be reformed so that they can make most efficient use of all the new income and wealth taxes that are recommended. The assumption is that almost complete government control of the economy would be best, but that the machinery needs some fine tuning.”

* Who Is Thomas Piketty And Why Has The Obama White House Rolled Out The Red Carpet For Him? by Hunter Lewis, AgainstCronyCapitalism.org, April 19, 2014.

Excerpt: “This is all complete nonsense. Economic growth is produced when a society saves money and invests the savings wisely. It is not quantity of investment that matters most, but quality. Government is capable neither of saving nor investing, much less investing wisely.”

* The Inequality Trap Distracts from the Real Issue of Freedom by Richard Ebeling, May 5, 2014.

Excerpt: “The only important and relevant ethical and political issue in a free society should be: How has the individual earned and accumulated his material wealth? Has he done so through peaceful production and exchange or through government-assisted plunder and privilege?

“Rather than asking the source or origin of that accumulated wealth — production or plunder — the egalitarians like Thomas Piketty merely see that some have more wealth than others and condemn such an ‘unequal distribution,’ in itself.”

Excerpt: “Parts of the US intelligentsia now advocate the same ideas that are to be found on Europe’s Left-wing fringes… Envy is back, disguised as a concern about ‘inequality,’ and the bail-outs and QE were merely a convenient excuse to bash the rich. It is shocking how many intelligent people now support seizing most of the wealth created by entrepreneurs…”

Excerpt: “Contrary to Mr. Piketty, the fact that the rate of return on capital is higher than the rate of economic progress does not at all imply that the fortunes of the rich will increase more rapidly than the overall size of the economic system. … Our problems today result largely from government policies that serve to hold down saving and the demand for capital goods. Among these policies are the corporate and progressive personal income taxes, the estate tax, chronic budget deficits, the social security system, and inflation of the money supply. To the extent that these policies can be reduced, the demand for and production and supply of capital goods will increase, thereby restoring economic progress, and the aggregate amount and average rate of profit will fall.”

Excerpt: “…inequality per se need not bother us as much as it does the Piketty-acolytes. …What matters is that living standards keep rising, and keep rising for all. That has been the crucial engine of humanity’s greatest achievements in poverty reduction, increases of life expectancy, literacy, culture high and low, and so on.”

* Liberal Pundits of the World Unite Over Thomas Piketty’s New Book: Democratic pundits have enthusiastically and unconditionally embraced a book that evokes Karl Marx and talks about tweaking the Soviet experiment” by David Harsanyi, Reason.com, April 25, 2014.

Excerpt: “…it is worth pointing out that liberal pundits and writers have enthusiastically and unconditionally embraced not only a book on economics but a hard-left manifesto. …But how does a book that evokes Karl Marx and talks about tweaking the Soviet experiment find so much love from people who consider themselves rational, evidence-driven moderates?”

Excerpt: “Are the rich getting richer? Yes. Are the poor getting poorer? No. In fact, over the past 35 years most Americans got richer. Has income inequality increased in the United States? Yes. Does it matter? …No. …if most Americans’ incomes are rising, does it matter if some are getting a larger share?”