(From the Activist Ammunition section in Volume 20, No. 7 of the Liberator Online. Subscribe here!) 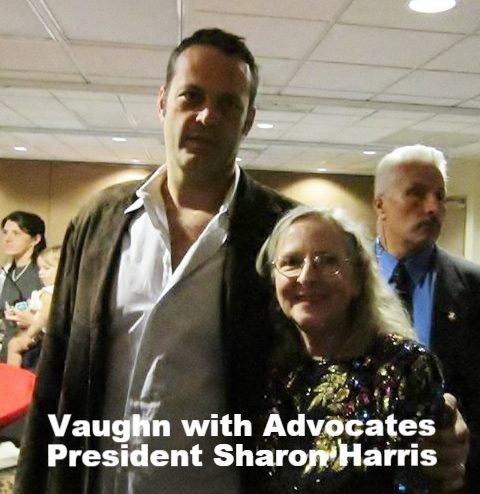 Vince Vaughn is one of the world’s most successful actors, screenwriters and producers. Since his breakthrough in the acclaimed 1993 independent comedy Swingers he’s become famous for his roles in some of the most popular comedies of the past decade, including The Wedding Crashers, The Break-Up, Starsky & Hutch, Mr. & Mrs. Smith, Couples Retreat, and Anchorman: The Legend of Ron Burgundy. The versatile Vaughn has also played everything from romantic leads to action heroes and psychotic villains.

Vaughn’s sympathy for libertarian ideas has been well-known for several years. In particular he’s been a strong and vocal supporter of Ron Paul.

“I would use the term libertarian to describe my politics.

“I’m a very big fan [of Ron Paul]. Ron Paul woke a lot of people up to the fact that government can’t handle everything for you. Once you start playing that game, where does it stop? I like the way it was until 1913 [when the 16th Amendment was ratified, legalizing a federal income tax], when locally you had sales taxes and property taxes. That seems ethical to me, because I can move to a different neighborhood or area if I like the services they provide. To this day, your police department and your fire department are paid for with local taxes, and that makes sense, because you might use those. But the federal government looking into your books to decide what to take from you, that feels wrong.

“Trusting the federal government to know what we need and to run things well feels like a bad idea. You see that in the foreign policy of force, where the United States decides to go into another country to make things turn out a certain way. It doesn’t work. It causes more problems. … I don’t agree with a foreign policy that says you can send troops places without declaring a war and without having a plan to win the war. I would think you would look at Vietnam and suggest it wasn’t the best-laid plan.

“I feel the same way domestically. … [Adults] should be allowed to decide what’s in their interest, what makes sense for them, unless they commit fraud or physical force or take someone’s property. …

“I think history has proven without a doubt that the proper role of government is to protect individuals’ rights and liberties. That has always been the most prosperous, freest society for people to live in. And when government gets too involved, society turns into a place that gets very, very ugly. …

“America today is not capitalistic. The problem is corporatism. The government has too much authority, and it’s dangerous. It stifles productivity and freedom and prosperity and peace. …

“The Patriot Act? Let’s get rid of it. Undeclared wars, doing away with personal liberties — let’s understand how that has worked out historically to see that it has led to some horrible things. Once our personal liberties are gone, when an American citizen can be pulled out of his house and detained for six months without a trial, where is our country? Once those rights are gone, how do you get them back?”

Read the rest of the interview for more.