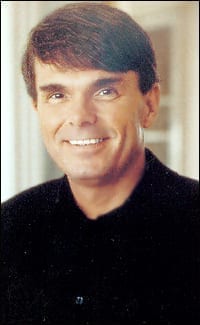 Mega-bestselling author Dean Koontz declines to call himself a libertarian. But Publishers Weekly chastised him for allowing his “libertarian views” to seep into his novels; Koontz complains that all politicians “get corrupted by power;” and he admits to being at least “semi-libertarian” on most issues.

But let’s take Koontz at his word; he’s just a semi-libertarian — albeit one who trumpets his distrust of government, power and politicians at almost every opportunity. Some examples:

• In an online chat on CNN.com (September 10, 2001), Koontz said, “Any time I’m looking for a good psychopath [as a character for a novel], I first check out the current crop of Congressmen and see what they are up to.”

• In The Dean Koontz Companion (Headline Book Publishing, 1994), Koontz said, “It had become apparent to me that the worst enemy of the working man and woman is the state, and that the average person is safest in a country that struggles to limit the size of the state.”

• In an interview with the Mystery Guild (2000), Koontz said, “We just left a century that gave us the worst mass murderers in history: Hitler, Stalin, Mao. History shows us, over and over again, that large groups of people given too much power over other people lose their humanity.”

Koontz’s libertarian — er, semi-libertarian — beliefs aren’t limited to interviews; they have increasingly infused the dialogue and perspectives of characters in his novels. Critics and fans have noticed. In 1994, Publisher’s Weekly wrote: “In recent years, Koontz’s libertarian views have seeped ever more deeply into his thrillers…” And his 1995 novel, Dark Rivers of the Heart — which exposed the abuse of asset forfeiture laws — was a finalist for the Prometheus Award, given by the Libertarian Futurist Society for the best libertarian sci-fi novel of the year.

Koontz traces his pro-liberty views to the late 1960s, when he worked for the Appalachian Poverty Program. The federally funded initiative, designed to help poor children, sounded “very noble and wonderful,” Koontz told Reason magazine (November 1996). In reality, it was a dumping ground for violent children, he said, and most of the funding ended up “disappearing somewhere.” In The Dean Koontz Companion, Koontz said he woke up one day and “realized that most of these programs are not meant to help anyone, merely to control people and make them dependent. I was forced to reconsider everything I’d once believed. I developed a profound distrust of government regardless of the philosophy of the people in power. I remained a liberal on civil-rights issues, became a conservative on defense, and a semi-libertarian on all other matters.”

Koontz said he eschews politics. “I try not to spend too much time on partisan politics,” he told Reason. “Life’s too short for that. I don’t really believe that there have been many human problems solved by politics.” Instead, Koontz — like the characters in his novels — puts his faith in the redemptive power of family, friendship, faith and freedom. “I believe in free will and individual choice and that we make our own lives as we go along,” he told Reason.

Koontz has made his own life into a remarkable success. With 225 million copies of his books sold, he is one of the most popular authors in the world. (In 2001, he was ranked #61 on Forbes magazine’s list of the 100 biggest celebrities, just behind quarterback Peyton Manning and ahead of actress Sandra Bullock.)

To deal with the abuse he suffered at the hands of an alcoholic father, Koontz escaped into fiction at an early age. He began scribbling stories for relatives when he was eight, and won an Atlantic Monthly fiction competition a senior in college. After a stint as a teacher, he turned to writing full-time in 1969, and began selling science fiction novels to paperback publishers.

As his novels became more ambitious in scope, style and theme, Koontz began to regularly hit the bestseller list, first in paperback (Whispers, 1980) and then hardback (Strangers, 1986). While frequently described as a “horror” writer, by the early 1980s most of Koontz’s books transcended the genre — and incorporated aspects of science fiction, horror, thriller and detective novels. (For example, 1990′s The Bad Place features detectives, telepathy, time travel, psychic powers and an incestuous hermaphrodite.)

Koontz’s genre-hopping books were an enormous hit with readers. Ten of his novels reached #1 on the New York Times hardcover bestseller list, including From the Corner of His Eye (2000), Sole Survivor (1997), Intensity (1996), Dragon Tears (1993) and Lightning (1988). Several of his books, including Demon Seed, Watchers and Phantoms, were made into movies, while Mr. Murder, Intensity and Sole Survivor were adapted as TV miniseries. Koontz also found success with children’s books, including Oddkins (1988), Santa’s Twin (1996) and The Paper Doorway (2001).

“I developed a profound distrust of government regardless of the philosophy of the people in power. I remained a liberal on civil-rights issues, became a conservative on defense, and a semi-libertarian on all other matters.” — Dean Koontz in an interview in The Dean Koontz Companion (1994)