I want to understand the difference between 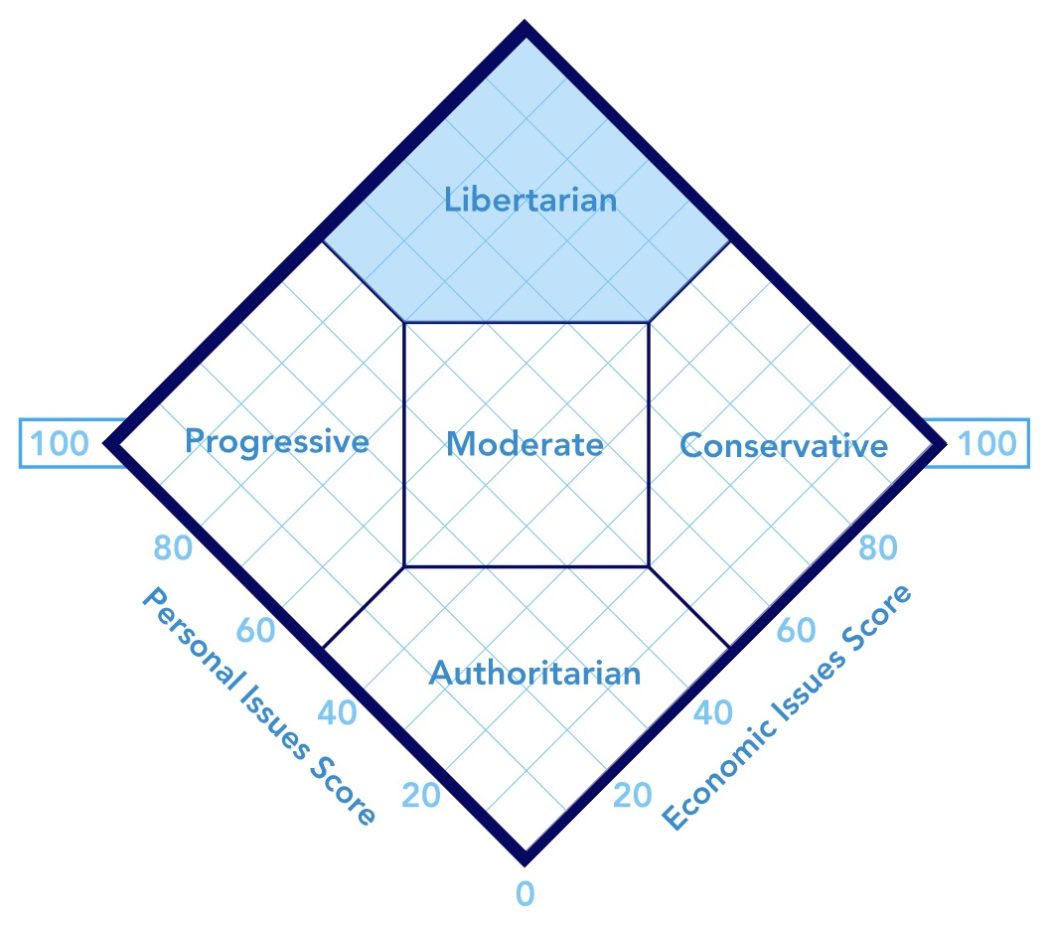 What Is The Nolan Chart?

The Nolan Chart is a basic mapping of political types that is more detailed than any simple left/right axis. The chart’s five types are determined by the degree of one’s support for two intersecting dimensions of freedom: economic freedom and personal freedom. Personal freedom is defined as the degree to which one may engage in certain behaviors unmolested. Such includes the practice of religion, the exercise of free speech, and the freedom to move around and/or associate with others.

What Are The 5 Political Types?

Learn about the five political types and compare them against one another. Libertarians score high on both economic and personal freedom. In other words, libertarians value entrepreneurship and enterprise, often because they think these are the bases of a prosperous society. Libertarians are also keen to protect the individual in his or her pursuit of happiness, however different that pursuit might look to others.

Because libertarians value both economic and personal freedom highly, they think governments should be limited or eliminated entirely. Government, after all, has a monopoly on the initiation of violence in a jurisdiction. Libertarians view this monopoly power with skepticism and as a potential source of injustice.

Because libertarians believe governance should be based on consent, some libertarians are willing to accept rules and restrictions on their behavior so long as they consent in advance and retain a right of exit. (See, for example, homeowners associations.)

Because conservatives value law and order, they also tend to support broader police powers. While some conservatives are uncomfortable with showy displays of wealth, they support individuals working hard and amassing wealth for themselves and their families. (In more recent times, some conservatives have come to embrace protectionist measures, which moves them in the direction of populism. See, for example, Trumpism.)

Conservatives also tend to embrace some form of religion or at least a shared moral system that they believe holds the social order together. Such includes family, tradition, honesty, and hard work. Indeed, most emphasize family as the basic ordering unit of society. Progressives (sometimes referred to as “liberals”) score lower on economic freedom but higher on personal freedom. That means progressives are quicker to embrace values of personal choice but place a comparatively lower value on private property rights or investment, production, and exchange. Many progressives think capitalism is a system that allows the strong to prey upon the vulnerable.

Most progressives are committed to the administrative ordering of society along economic lines. Because progressives view themselves as advocates for those they consider dispossessed or disenfranchised, progressives favor wealth redistribution. Such redistributive policies include high taxes and revenues to fund centralized social programs or welfare schemes.

In recent decades, many progressives have moved away from supporting civil liberties such as free speech, and legal doctrines such as equal treatment under the law. Instead, more progressives think that social justice requires abandoning civil rights in favor of “equity,” which means equality of outcome. More contemporary progressives are willing to curtail the freedoms of certain groups — such as the wealthy — whom they view as oppressors operating in an unfair system. Moderates (sometimes referred to as “centrists”) score neither particularly high nor particularly low on either economic or personal freedom. That’s because moderates tend to be pragmatists or otherwise think about issues on a case-by-case basis. As with any other type, moderates can ‘lean’ progressive, conservative, libertarian, or authoritarian — it’s just that those leanings aren’t extreme.

Other forces shape moderates’ views, so they are, in many ways, the most difficult type to understand. For example, political moderates sometimes support centrist views not on any principle but on the grounds of political expediency. Instead of asking What does my ideal society look like? They might instead ask What can we possibly get done here? In this way, it’s no wonder that moderates sometimes have a populist streak.

Moderates can also be difficult to type because they can have extreme views on one issue but not on another. So while some moderates just don’t have strong views about anything, other moderates have strong feelings on this issue or that, which seems inconsistent to those with more comprehensive ideological views. In any case, the core of being a moderate is sometimes simply to view a given matter with greater circumspection and less extremism. Authoritarians generally score low on both economic freedom and personal freedom. That means authoritarians are not only hostile to free enterprise, but they also believe authorities ought to regulate people’s personal behaviors to maintain social order. Authoritarians want the state to control more aspects of economic and personal life because they think such control is more likely to bring about an ideal society.

With regard to personal liberties, authoritarians think autonomous individuals are a threat to the overall order. Ideal societies have to be planned. As such, society’s planners cannot tolerate excessive diversity of opinion or any expression that challenges or questions its authority or expertise. People have an urge to control or to submit to control in times of crisis. Authoritarians understand this dynamic well and are willing to use it to realize their conception of the good, even if such requires the threat of state violence.